We shared some exciting news at the Centre last week. CLL has gained our own mascot, meet Brian the dog! The black Labrador joined us last term when Jessica Langston, Teaching Fellow on our Social Work programmes started teaching at the University. Since he has won the hearts of staff and students at the Centre and can be seen playing in the green next to CLL’s building and walking around Westwood campus with the students.

Jess, Brian’s owner shares with us the story of how he became the mascot of CLL:

Why do you bring Brian to campus?
Brian belongs to my son who has autism, as part of Brian’s training I became aware of the benefits dogs can have in relation to wellbeing. I started to bring Brian into my office as a PhD student and the feedback was that his presence had a positive impact on students and staff. There is a significant body of research that suggests a physiological benefit as well as a psychological improvement as a result of having a dog in the workplace. When I started working at CLL I discussed this with the team and arranged to bring him to work. The feedback from staff and students has been great, that having Brian on site to talk to and play with during lunch, contributes to a general feeling of positivity. He’s even converted Tim, who I share an office with, before Brian came in he described himself as “not a dog person” but after a day sharing an office with him he concluded that having Brian around makes the day brighter.

How does he enjoy CLL?
Brian is a working breed of Labrador and requires lots of mental stimulation, the new smells here on Westwood make him really happy. You can tell his happy as he wiggles his bottom so much so that he makes very little progress moving forward, it’s all side to side. He also really likes sitting next to my colleague Jim who Brian has trained to give him half of everything, so Jim takes a bite of a biscuit and gives the rest to Brian. We have all been impressed at how quickly Jim picked up this new trick.

What is his favourite part of coming to the campus?
Brian has been trained to be attentive and listen, so his favourite part of being here is that people talk to him, they take 5 minutes out of their day to come and sit or kneel with him and tell him about their day, about an upcoming meeting or lecture or more often than not to come and tell him how gorgeous he is or how soft his ears are.

How did the staff and students react to Brian’s arrival?
There has been an overwhelmingly positive response to having Brian on site, so much so that after a month of not bringing him I was getting questions about where he was and when he was coming back. Here are some of the comments made by the CLL team:

“My work involves supporting the use of technology for learning, but I also know that taking a break from the screen and interacting with the real world is important too. So meeting a friendly dog like Brian is always a pleasure. Dogs are great for social interaction and even in our department Brian has managed to get us all talking!”
Jim Judges (Senior Academic Technologist)

“I’m not a massive dog person, but having Brian in the office surprised me in how effective it was at boosting an overall sense of wellbeing. Having him come over for some attention whilst I’m working isn’t as distracting as one might imagine, but rather it permeates the room with a sense of relaxation and calm which I found quite affecting.”
Tim Coleman (Teaching Fellow)

“It doesn’t matter what I’ve done or not done, Brian always greets me with a wag of the tail.  He lifts my spirits!” Gill Frigerio (Associate Professor)

What do you the students do with Brian?
Whilst a number of students enjoy joining us for a walk at lunchtime the most popular activity with students appears to be throwing a ball for Brian, which he would fetch all day long if he could. There’s something wonderfully predictable about throwing a ball and it being brought back for you to throw again, and students enjoy this break from their day.  There’s no expectation to chat to each other or to talk with me and in the middle of a day’s teaching, this can be a refreshing break and some much needed fresh air. 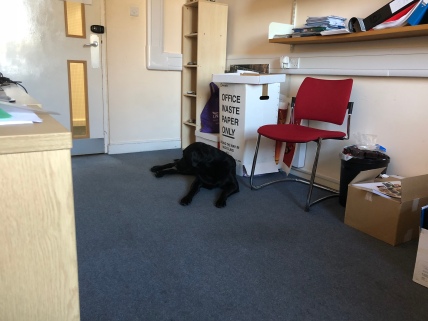 Where does Brian stay when he comes to CLL?
Brian sleeps by my desk in room 0.16 at the Centre for Life Long Learning.

Jess Langston is a Teaching Fellow on the Social Work programmes at the Centre for Lifelong Learning.

View all posts by nmcgreevy